$25 OFF Today Only! Enter OnlineBoys at Checkout

The Inspection Boys on the Cover of Franchising USA Magazine! 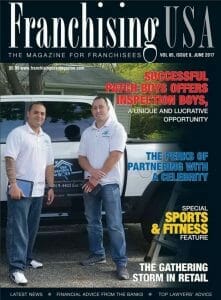 With a low initial investment, low overhead costs and high profit margins, one new home inspection franchise looks to be a promising endeavor for the right people.

“We already have a lot of interest,” Goldberger said during a recent interview.

It is Goldberger’s goal to have Inspection Boys’ first 10 franchisees signed up by the end of this year.

Goldberger is confident that he can grow Inspection Boys into a successful franchise because he’s already done it once before with Patch Boys.

Based in East Brunswick, NJ, Patch Boys is a drywall patching franchise that just celebrated its two-year anniversary in May. It currently has 37 locations spread throughout the United States.

Whether a person needs a hole patched in their wall that was made by a plumber, electrician or exterminator or they want to fix settling cracks that are so common in older houses, Patch Boys will quickly do those small patch jobs that regular drywall contractors won’t bother with.

“We came up with a process where we come to your house and in approximately two to three hours, we fix all your holes. We correct them, we sand them, we polish them, we paint them, we do everything that we need to do to make your wall look like new again,” Goldberger explained. “We cover everything and when we’re done, it’s like you wouldn’t even know we were there.”

From Zero to Success

Goldberger had been in the construction industry since the early ‘90s and by 2007 was running a highly successful construction company with over 400 employees. And then the housing bubble burst. He lost everything, plummeting from ultra-successful business owner to zero in a matter of months.

Once Goldberger hit bottom, he dusted himself off and got back to work. He tried his hand at a few different businesses, but his heart was always in construction. After much brainstorming, the light bulb finally turned on for him.

Eventually, he found the answer was drywall patching. But, it took several months to fine tune the business model to the point where it was successful. He ended up losing money in his first year while he worked out all the details.

Starting his first location in New York in 2008, Goldberger began franchising the concept in 2015. People doubted whether the concept would work as a franchise and told him he might have five locations maximum, but two years later, he has almost 40 and the company has grown a minimum of 15 percent month over month since its inception.

Goldberger knew he was onto something big when he attended his first trade show with the concept.

“We did a show in New York that first year in the convention center and we were one of the most popular booths,” he recalled. “The one thing that everybody said to us was: ‘I could use you right now in my home’.”

It wasn’t always easy signing up new franchisees, though.

Goldberger didn’t have any background in franchising and he knew his concept was brand new and people might have doubts. So, when he traveled to Cherry Hill, NJ to visit a couple of guys he was trying to prove the concept to, he knew he had to make an impression.

Much to the surprise of the two men, Goldberger put his fist through their office wall. But, he had brought one of his Patch Boys employees with him and while Goldberger and the two shocked men left to talk about the concept as a franchise, his employee patched the hole and had it done  by the time they all came back to the office.

“They were looking for the hole. They didn’t even know where I had put it,” Goldberger said. “It was a gutsy move on my part because I had to make a big impression, but they signed up with me right there and then.”

Patch Boys franchisees come from all walks of life, Goldberger pointed out, and, despite the name, the company actually has 25 percent female ownership. All he is looking for in franchisees for either Patch Boys or Inspection Boys is hard working people who want to make the business successful.

“If you work, there’s absolutely no way you’re not going to make money,” Goldberger proclaimed.

The Patch Boys concept has already been proven in a variety of markets across the country and with its tiny startup investment and zero overhead costs, he is confident Inspection Boys will prove to be just as successful.

The low startup cost and low overhead are important points for Goldberger. The materials for patching drywall are inexpensive. With one sheet of sheetrock and one bucket of compound, and a few tools, a Patch Boys franchisee can perform about $2,000 worth of work and make a significant profit.

For a startup cost of less than $30,000 (with a 20 percent discount for veterans), that translates to huge profit margins.

Both franchises can be run out of a home and both are in particularly high demand industries, too. Millions of homes are sold across the country every year and all of them have to be inspected, Goldberger noted. And Patch Boys franchisees are kept constantly busy.

Goldberger said he has franchisees who have made back their entire investment and were in profit mode in three to four months.

In Cleveland, for example, where the Patch Boys franchisee has only been operational for a short time, that franchisee did $7,000 worth of business in his first month, $17,500 in his second month and even more than that in his third month.

Part of this quick escalation can be attributed to Goldberger’s dedication to support and training. Rather than have franchisees come to him, he will gladly hop on a plane and go to them.

“In 2016, I was in about 15 states just doing training and following up with people,” he said. “I will do whatever it takes, to make their business work. That’s the bottom line.”

Franchisees are trained how to fix drywall like a professional. They are also put into the Patch Boys phone system where people can call a toll-free number and then punch in their area code and be connected directly to their local Patch Boys.

The franchise also offers constant support and is always advertising and promoting the business, something Goldberger plans to offer with Inspection Boys, as well.

For those looking for a business with low startup costs, low to no overhead and constant demand, both Patch Boys and Inspection Boys offer a unique and lucrative opportunity.

The Inspection Boys Delivers Every New Franchisee a Membership in InterNACHI…
Next Post:Despite Speculations, The Long Island Housing Market Is On the Rise

This site uses Akismet to reduce spam. Learn how your comment data is processed.